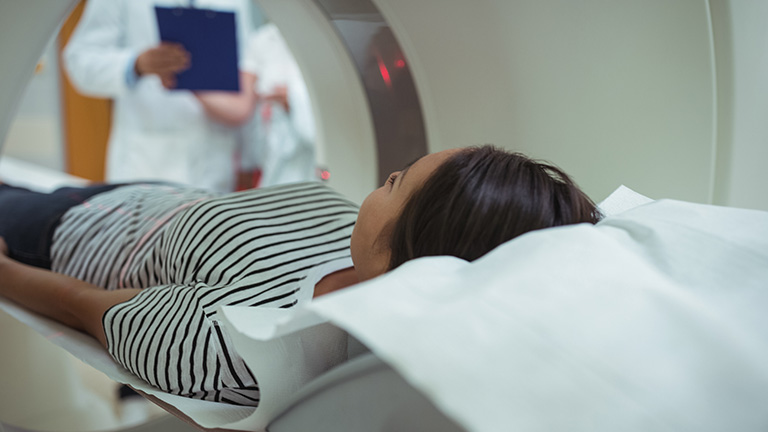 Newark Radiation Oncology uses many advanced treatment modalities to accurately treat many types of cancers such as:

Positioning women with early stage breast cancer in the prone (face down) position while undergoing radiation treatments can substantially limit the radiation dose that reaches the heart, lung, and skin. The heart can be particularly vulnerable to late effects of radiation when the left breast is treated in the supine (face up) position. A customizable positioning device allows the woman to lie comfortably in the prone position for radiation treatment, and the affected breast falls away from the chest wall. Studies have shown that prone breast irradiation allows less lung and heart radiation dose during treatment delivery, and may possibly improve the short and long-term effects of radiation on the treated skin. Prone breast radiation may not be suitable for all women. Patients should discuss with their Radiation Oncologist whether they would be a candidate for treatment in the prone position.

No two tumors are the same, they come in all different shapes and sizes and every patient’s body is unique. 3-D CRT uses computers and special imaging techniques such as CT, MRI, or PET scans to show the size, shape and location of the tumor as well as surrounding organs. Our Radiation Oncologists precisely tailor the radiation beams to the size and shape of each individual patient’s tumor with special shielding. Because the radiation beams are carefully targeted, nearby normal tissue receives less radiation which can help reduce any radiation side effects.

Intensity modulated radiation therapy is a specialized form of three-dimensional conformal radiation therapy (3-D CRT) that allows the radiation to be specifically shaped to cover the tumor and spare normal tissue. With IMRT the radiation beam can be broken up or “modulated” into many “beamlets” and the intensity of each beamlet can be adjusted individually. IMRT makes it possible to further limit the amount of radiation received by healthy tissue near the tumor. In some cases, this may allow the delivery of a safer higher dose of radiation to the tumor.

IGRT is a new approach to delivering radiation therapy that allows for more accurate delivery of radiation to the target area. IGRT involves daily imaging during the course of radiation treatment. A computer compares the images taken at the time of treatment to images taken during the treatment planning phase. By using this process, IGRT is able to account for any changes in the patient’s body or position that may shift the exact location of the tumor. This enables increased accuracy of very complex treatment approaches.

SRS is a specialized technique that allows the Radiation Oncologist to use extremely focused beams of radiation to destroy certain types of small brain tumors using higher doses than with conventional daily radiation treatments. Because the radiation beam is so precise, the Radiation Oncologist may be able to spare more healthy tissue. SRS treatments can be prescribed to deliver the total dose of radiation in a single treatment or in a fractionated manner over a course of several weeks.

Similar to SRS, SBRT are treatments outside of the brain. Often used for the lung, spine, or liver. SBRT may allow radiation to be given in a way that is safer and more effective than other radiation techniques.

4D CT is a CT scan during the simulation process used to account for tumors that move while breathing, specifically lung tumors. The Radiation Oncologist may design a more precise treatment plan using 4D CT to help eliminate excess dose to normal tissue and eliminate the chance of missing the tumor.

Palliative care (also known as supportive care) strives to improve the quality of life of people with serious illnesses, including cancer. Palliative care is available to people with cancer of any age or with any stage of cancer. The goal of palliative care is to relieve distressing symptoms, such as pain, shortness of breath, loss of appetite, problems with sleep, fatigue and many more. These distressing symptoms can be caused from the cancer itself or from medical treatments. By relieving these symptoms, it is hoped that the patient’s strength and vitality will improve enough to carry on with daily activities and tolerate other medical treatments.

Have a Question or Need More Information?